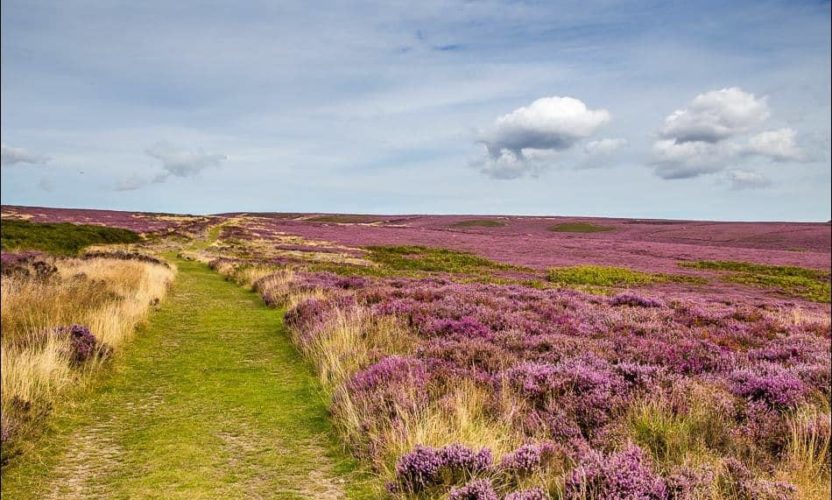 5 Unique Winter Walks In The North York Moors
There is no need to stay indoors in the Winter when you live in a lovely area like the North York Moors. There may be crisp days at times but as long as rain is not forecast, at least heavy and persistent rain, then you can wrap up warm, put on some good footwear and take one of a number of popular winter walks on the Moors; there’s something for everyone.

The famous White Horse of Kilburn was the idea of a local man who made his money in London. It was created by a schoolmaster and his pupils in the middle of the 19th Century and maintained by volunteers for years afterwards.

The outline was marked out and then the earth removed down to the limestone rock. From time to time subsequently chalk chippings are added to maintain its appearance.

It is visible from miles away but you can get really close up by taking a walk to it from Sutton Bank National Park Centre. The walk of three miles takes you along an impressive escarpment and there are lovely views all the way.

You will move off the escarpment along paths through the woods then climb back up to the White Horse itself. Few views from the White Horse across the region are more impressive.

Take care when you begin because there is a busy road to negotiate. Once you get going the path is fairly level with no stiles or gates but there are no fences on the edge of the cliff. 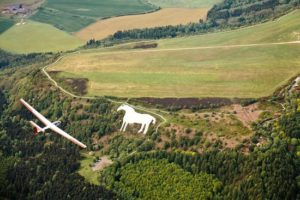 The woody section can be muddy after a period of rain so careful again. You climb stone steps to get to the Horse. Incidentally, the gliding club use this area for take-off.

Members of the Yorkshire Gliding Club have been using Sutton Bank since the 1930s; the air that rises up and over the escarpment edge make it a great place to take off.

The altitude record of the Club is a hugely impressive 33,000 feet. You will see gliders landing to the east of you as you walk along. You need to keep your eyes open because gliders are silent.

While you will be able to appreciate the size of the Horse when you are close by, its overall appearance can only be appreciated from afar. However, the walk is lovely and you can always see the White Horse from a distance and remember that you have been there.

You are welcome to take your dog but please keep it on a lead.

This walk is another where you will get some fantastic views of the National Park. It is eight miles long over Cold Moor towards the stunning rocky crags of the Wainstones. While the walk is a challenge, the rewards are well worth it. 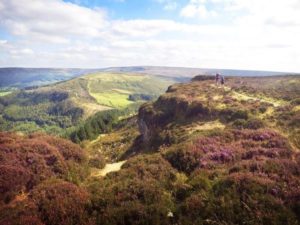 You may come across rock climbers trying to scale the crags and you will certainly see the highest point of the North York Moors, Urra Moor.

The route you take is through heather along moorland tracks on Cold Moor and Urra Moor. They are well-defined although they can be wet, even boggy so you need good footwear. Weather conditions vary and even in summer you can find that visibility is suddenly poor.

The section of the walk which forms part of the Cleveland Trail is mostly stone surface and clearly marked. You have no stiles to negotiate but you need to be aware of some steep climbs and descents at the Wainstones and Hasty Bank.

Your dog must be under your control on a lead at all times. That is especially in the seasons of spring and early summer when birds are nesting on the ground. Similarly, there could be livestock, horse riders and cyclists around.

The Wainstones are the largest sandstone crags in the North York Moors. The pillars and buttresses are exposed to the elements so it shows how resistant they are to weathering. Where there are weaknesses, wind and rain have penetrated cracks to create the landscape you see today. The sound created by strong winds is quite eerie.

As you pass the twin pillars of the steeple and the needle, you may see rock climbers because they are a particular favourite.
Human activity has made an impact on the landscape over the years. Three Howes on Cold Moor are Bronze Age graves more than 3,000 years old.

One theory is that Howes was a boundary marker between ancient territories. Another possible boundary marker is on the edge of Urra Moor, a bank and ditch that no one has managed to age accurately. 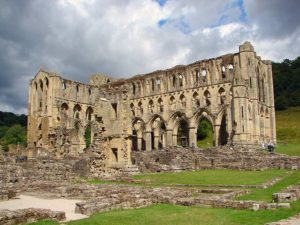 The market town of Helmsley to Rievaulx Abbey is a walk that has never lost its popularity. It is a circular route of 7 miles with gentle climbs to reveal good views of the Town and its Castle.

It goes down through woods, and their bluebells when in season, to the impressive ruins of Rievaulx Abbey. You may return the same way or alternatively continue to Rievaulx Terrace and Griff Farm which is located above the Abbey.

This is the first section of the Cleveland Way National Trail; just follow the signs and you will be fine. One section uses a minor road to Rievaulx Abbey and up to the Terrace although at certain times a path is open. 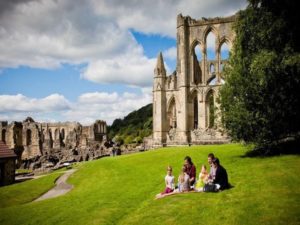 Avoid the busy B1257 on your return and use the paths via the Farm through fields with livestock; it means your dog must be under control. It is worth knowing a little about Rievaulx Abbey.

It was built by French monks in the 12th Century who came upon the site by accident. Their Abbot Stephen and the monks proceeded to build the largest and wealthiest Cistercian Abbey in the Country.

The immediate area was cleared for agriculture and Griff Farm is the remains of Griff Grange where the monks grew crops. As many as 140 monks lived there together with a further 500 lay brothers and servants. It was so wealthy it caught Henry VIII’s attention and he dissolved monasteries in 1538.

Left to slowly decay, it was bought towards the end of the 17th Century by the son of Sir Charles Duncombe, a London banker who owned Helmsley Estate. These days, it is National Trust land but the Duncombe family still own the Mansion that was built on the Estate all those years ago. 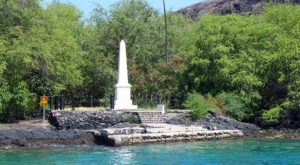 These two famous landmarks on the North York Moors make a lovely 7-mile walk. You can start from the railway station by crossing the bridge and heading up the road or by parking in Newton Under Roseberry car park and heading up Roseberry Lane.

Roseberry Topping is just over 1,000 feet, a climb more than a walk but the paths and tracks through woods and over moorland are easy to follow. An alternative is to that route is somewhat gentler, starting at Gribdale Gate and heading to Cook’s Monument named after the locally-born Captain Cook.

Take care when you come to the railway line and dogs must be on a lead even outside the bird nesting season. You can imagine James Cook gazing from on high to the North Sea in his early days.

He was an apprentice in Staithes as a youth and then went on to Whitby. Great Ayton has a small Cook Museum as have Staithes and Whitby. 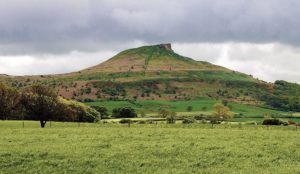 Roseberry Topping is most unusual; avoid the steep face that makes the Hill such an interesting sight. The top is sandstone but the western face was the result of a collapse in 1912 after years of mining alum, jet and ironstone in the hill.

Newton Wood, on the slopes of Roseberry Topping, is seemingly over 400 years old and much more of the North York Moors was formerly woodland. You will see oak, rowan, ash, alder and sycamore; most of the oak were planted in the 19th Century. The Wood’s birdlife includes great spotted woodpeckers, flycatchers, warblers and blue tits. 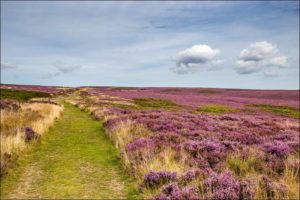 5. Levisham and Hole of Horcum

This 5-mile walk should be on everyone’s list. The views are wonderful as you walk from Saltergate to the Hole of Horcum following a well-defined path over Levisham Moor. En route, you pass some important archaeological remains.

Skelton Tower is a slight diversion which is well worth it for the views. On you go into the ravine of Dundale Griff and return through the valley to the Hole of Horcum before climbing back out at Saltergate.

At times the path over Levisham Moor may be muddy, but not too slippery. It is more important to be careful in the ravine of Dundale Griff which can be slippery.

You must keep your dog under control at all times.

The Hole of Horcum is a natural amphitheatre 400 feet deep and over half a mile across. Legends talk of the ‘Devil’s Punchbowl’ where Wade the Giant scooped out earth to throw at his wife when they argued.

The truth is that its formation was the result of spring water undermining the slopes of the hillside over thousands of years. A narrow valley became what it is today.

The archaeological remains on Levisham Moor date back to Bronze Age life and include banks, ridges, ditches and mounds which were likely boundaries as well as defensive constructions.

In the Middle Ages, there was a sheep farm at Dundale Griff, and stone foundations are still evident. Don’t stray from the path to ensure you do not accidentally destroy the remains.

Ruined Skelton Tower looks down into Newtondale over the North York Moors Railway tracks. Robert Skelton was Rector of Levisham and built the Tower in 1830. Enjoy a picnic there listening to the sound of the stream and make sure you take your camera. 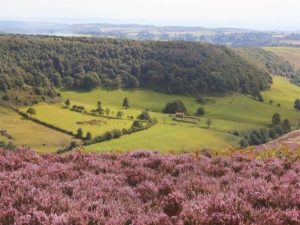