The big open skies of the North York Moors are breathtaking by day, and also by night when the dark sky panorama is revealed.  We’re officially one of the best places in the country to see stars, because of the low light pollution levels and clear horizons. From a town or city you’ll be lucky to spot more than a handful of stars but the further away you get from street lights, the better the view – in the darkest areas of the National Park you can spy up to 2,000 at any one time.

Hopefully this will spark more interest in astronomy and stargazers in the area as people are already starting to act on keeping levels of light pollution down.

Where should I go?

Three places in particular are recognised as special sites in the National Park. Our two National Park Centres at Sutton Bank and Danby, plus Dalby Observatories in Dalby Forest are Dark Sky Discovery Sites (Milky Way class) – so named because the galaxy is often visible to the naked eye from the sites. Dark Sky Discovery is a network of organisations that helps people to enjoy the night sky.

Other places in the National Park are also recognised as great places, including Rosedale Chimney Bank, and the Bruce Observatory in Whitby where Whitby & District Astronomical Society host stargazing events plus Yorkshire Arboretum, in the neighbouring Howardian Hills AONB, run a number of bat walks and stargazing events throughout the year.

Three of the favourite locations loved by photographers  across the National Park that are easy to find and lend themselves to fantastic photo opportunities on clear nights are the following:

Located conveniently on the side of the road between Hutton le Hole and Castleton, Young Ralph’s Cross is in the perfect location for year-round images. With its unobstructed views to the north, occasionally it’s possible to capture the Northern Lights dancing behind the cross. In summer months, the rare and elusive Noctilucent Clouds can be photographed.

The Milky Way can always be photographed from this location and, with a little practise, you can easily line it up with the Cross. March to late April and then August through until the end of October are the best months as the Galactic core of the Milky Way will be visible.

Using the numerous free apps that are now available for your mobile phone such as Sky Guide, will not only let you find celestial bodies easily in the sky by pointing your mobile phones camera at it, but they also allow you to plan in advance to optimise the best time to visit. 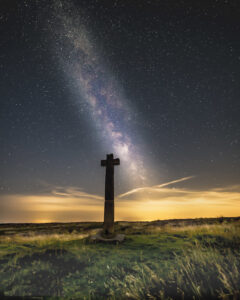 Head out of Helmsley towards Carlton and follow the road down Cowhouse Bank. After a few miles you will arrive at Bonfield Gill, which has parking for a couple of cars at the side of the road. Being at the bottom of a valley, it has some of the darkest skies across all of the North York Moors. Bonfield Gill does not offer the same opportunities year-round that Young Ralph’s Cross does, however from late March through until early May, the Galactic core of the Milky Way lines up perfectly with the Gill.

It’s a fantastic location for taking single images or you could even try to create some epic time-lapse footage from here. As with all dark sky photography, having a head torch is much easier than using a handheld torch. Ideally one with a red-light option is even better as it protects your night vision, allowing you to see the night sky in all its glory with your own eyes.

Following Wheeldale Road from Egton Bridge you will soon be onto the open moors. Standing proudly by itself is a lone tree, which makes for great foreground interest in any photo. As with all dark skies photography, is it always advantageous to visit your chosen location in daylight to plan your shoot and become familiar with your surroundings. It would be very easy to drive past the tree here if you do not know exactly where it was.

This is another year-round location for taking great images. A very early start on a clear moonless morning in March or April will enable you to shoot a panoramic image of the Milky Way Arch through the night sky from the south east into the northern skies, with the tree directly under its arc. Later on in the year, as the Milky Way rises vertically, it will align perfectly with the tree.

For the best results in all locations, ideally you need to take images when there is little or no moonlight. A full moon looks beautiful but the light it gives off saturates the skies, making it very tricky to create stunning images. 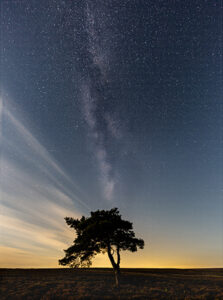