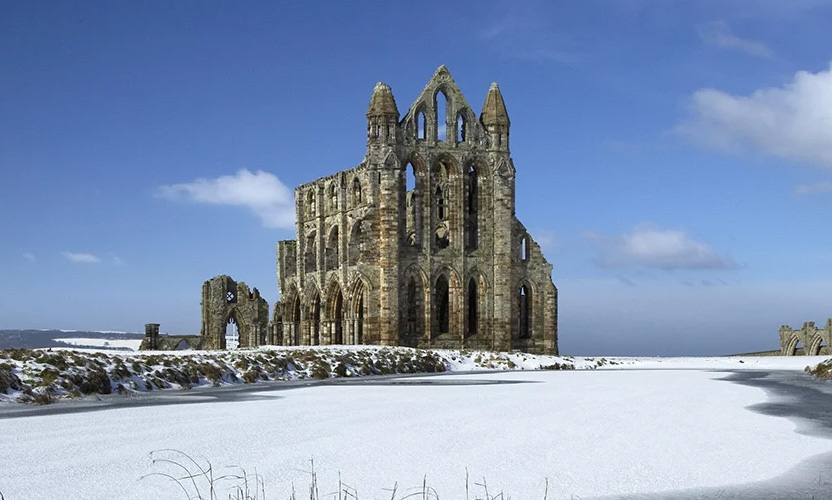 If you’re looking for a charming seaside destination on the east coast of the country, you’ll be hard pressed to find a more enticing mix of things to do than at this famous harbour town.

1. Take a Ride On The North Yorkshire Moors Railway

The first in our Whitby points of interest is the North Yorkshire Moors Railway. This is just great for those that love trains as well those that appreciate amazing country scenery with bags of vintage charm. The trains come in steam or vintage diesel form and visit a collection of little station stops throughout the North Yorkshire Moors National Park. The train passes through Goathland station, which is famous for its appearances in a number of TV and film productions including the original Harry Potter feature film, The Philosopher’s Stone. If you want a day of sightseeing without having to walk the miles between landmarks, this is the way to do it!

You can’t take a trip to the coast without hitting the beach. Sandsend is considered by many to be one of the best beaches surrounding the town of Whitby making it the perfect place to take a seat, relax and take in some much needed sea air. The main beach stretches around the west cliff and takes you from Whitby all the way to the best parts of Sandsend. Many who like a good beach walk will find this to be the perfect stretch of sandy beach for a long stroll. It’s best to do this when the tide is fully out to get the most attractive views as well as the most time to enjoy a slow relaxed pace. If you are taking the dog, be sure to look out for the dog-friendly beach areas on the east side of town.

This is one of the most iconic landmarks within the centre of Whitby town. Atop the cliff that dominates Whitby’s scenery sits the historic St Mary’s Church. To get there, visitors will have to climb the 199 steps that have been carved into the side of the cliff. The path is perfectly safe and attracts climbers of all ages and fitness levels. These steps were made famous by Bram Stoker’s Dracula. Those that reach the summit will enjoy breathtaking high ground views of Whitby and its harbour. The beginning of the steps can be found on the east side of town along Church Street. St Mary’s Church features a collection of old graves, some dating as far back as back as the 1700’s. Whitby Abbey is at the back of the graveyard. It’s been left a ruin after being severely attacked by the German army on their failed attempt to invade Britain during the second world war.

Whitby Abbey is certainly one of the most unmissable tourist attractions in town. It is only open to the public via booked tours but many visitors to Whitby are determined to climb the steps so that they can catch a view of the Abbey even if only from outside it’s gates. As you can imagine, the Abbey has famous connections to Bram Stoker’s Dracula, undoubtedly playing a large role in influencing the novels eerie settings.

5. Get Fish And Chips While Visiting The Bandstand

Whitby is famous for Dracula, the steps, its clifftop abbey and of course, for it’s world class fish and chips. When you hear others say they’ve had the best fish and chips in the world here in Whitby, they aren’t kidding. Many of the fish and chips stores within the centre of town have won awards for their chip and batter quality. Almost all fish and chip stores in the town are super proud of their stellar ingredients as well as their cooking processes and certainly don’t shy away from shouting out about where their stock is sourced and the precise awards that they have won in recent years. This competitive spirit has made the town a hotbed for quality food. Sample one or sample them all! You’re also spoiled for choice when it comes to outdoor scenery to eat by, whether you decide to stroll along the harbour to see the Whitby Lighthouses up close or check out Whitby’s picturesque bandstand.

If you’re in Whitby for a few days, you’ll notice a lot of the culture plays into a real pirate theme. This isn’t random, it’s because the town and some of its surrounding villages were notoriously linked with smuggling. Robin Hoods Bay is well known for its history as a smuggling haven along the Yorkshire coast. This little village sits just a short drive north from Whitby and is a fine place to visit for those that are interested in soaking up more of this period pirate vibe. Many visitors will park at the top of the bay and walk through the villages cobbled streets and swarm of cute cafes to reach the bay at the bottom. It’s a superb location to grab a bite surrounded by village scenes filled with history and periodic charm. Check out our list of things to do in Robin Hoods Bay.

7. Enjoy A Journey Across The Yorkshire Moors

If you prefer to walk or cycle over taking the train, the North Yorkshire Moors is the perfect place to enjoy the beauty of local nature and the great outdoors. The popular TV show Heartbeat was filmed throughout this national park. Goathland village features famous scenes from the series as well as a traditional steam train station. Train enthusiasts will love standing on the railway bridge and enjoying the steam trains passing along the track beneath you.

We really hope this collection of our Whitby Points Of Interest has helped!